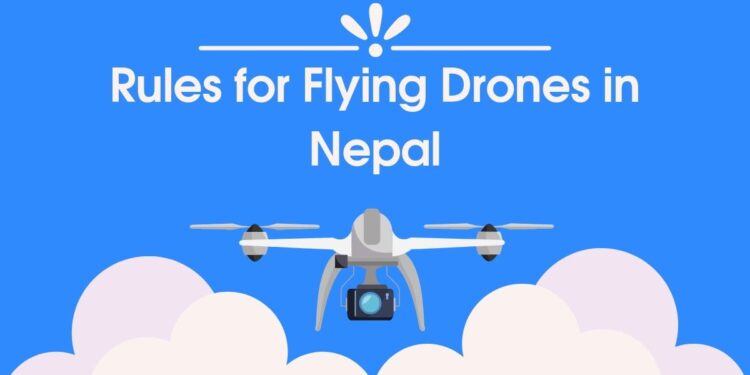 Drones are getting quite popular these days. People use it for different purposes. As it is Unmanned Aerial Vehicle, it can also be used to perform various destructive and illegal activities. So, each and every country has their own set of rules for the regulation of drones.

If you’re a traveler, most probably, you own a drone. If you’re planning to visit Nepal and capture its mesmerizing views with your drone, wait! To be safe from being fined and punished, you need to know the drone flying policy of Nepal.

We’ve presented you the rules set by the CAAN (Civil Aviation Authority of Nepal) to be followed while flying drones in Nepal.

The term UAV is an abbreviation of Unmanned Aerial Vehicle, meaning aerial vehicles which operate without a human pilot. For the purpose of clarity, UAVs are categorized as “small” and “large”. This Directive is issued for the regulation of small UAVs that weigh less than 20 kgs. This note provides an introduction to the use of Unmanned Aerial Vehicles (UAVs), more commonly known as “drones”. These are remotely piloted aircraft that range from simple, hand-operated systems to high altitude, long endurance systems similar in operation to small aircraft.

For aircraft of 20 kg or less, these are referred to as a ‘small unmanned aircraft’, for which the requirements are as follows:.

2.1 A person shall not cause or permit any article or animal (whether or not attached to a parachute) to be dropped from a small aircraft so as to endanger persons or property.

2.2 The person in charge of a small unmanned aircraft may only fly the aircraft if reasonably satisfied that the flight can safely be made.

2.3 The person in charge of a small unmanned aircraft must maintain direct, unaided visual contact with the aircraft sufficient to monitor its flight path in relation to other aircraft, persons, vehicles, vessels and structures for the purpose of avoiding collisions.

2.4 The person in charge of a small unmanned aerial vehicle which has a mass of more than 7 kg excluding its fuel but including any articles installed in or attached to the aircraft at the commencement of its flight, must not fly such an aircraft: a) In the airspace provided with Air Traffic Control Service, including within Aerodrome Traffic Zone, unless the permission of appropriate Air Traffic Control Unit has been obtained.

b) at a height of more than 400 feet above the surface unless it is flying in airspace described in sub-paragraph (a) above and in accordance with the requirements for that airspace.

2.5 The person in charge of a small unmanned aircraft must not fly such an aircraft for the purposes of aerial work except in accordance with a permission granted by the CAAN.

3.1 The person in charge of a small unmanned surveillance aircraft must NOT fly the aircraft in any of the circumstances described in paragraph (3.2) except in accordance with a permission issued by the CAAN.

3.2 The circumstances referred to in paragraph (3.1) are:

a) over or within 150 metres of any congested area;

b) over or within 150 metres of an organised open-air assembly of more than 1,000 persons;

c) within 50 metres of any vessel, vehicle or structure which is not under the control of the person in charge of the aircraft; or

3.3 Subject to paragraph (3.4), during take-off or landing, a small unmanned surveillance aircraft must not be flown within 30 metres of any person.

3.5 Security clearance shall be required for all unmanned surveillance aircraft activity from the concerned authority prior to applying for permission from CAAN.

4.1 The aircraft must be kept within the visual line of sight (normally taken to be within 500 m horizontally and 400 ft vertically) of its remote pilot (i.e. the “person in charge‟ of it). Operations beyond these distances must be approved by the CAAN (the basic premise being for the operator to prove that he/she can do this safely).

4.2 The operation must not endanger anyone or anything.

4.3 The ‘remote pilot’ has the responsibility for satisfying him/herself that the flight can be conducted safely.

4.4 Unmanned aircraft shall be permitted to be operated in day VMC conditions only.

4.5 CAAN permission is required for all flights that are being conducted for aerial work subject to the approval of concerned Authority having jurisdiction over such aerial work.

4.6 If the operations are to be conducted in a Restricted or Prohibited area, prior approval from the concerned Authority is required before applying for CAAN permission.

4.7 Airport areas including take-off and approach paths shall be free of all UAV activity at all times regardless of altitude.

4.8 Remotely controlled aerial toys (drone) weighing less than 2 kgs. do not require permission from CAAN while operating within the premises of private property of the operator below 400 ft AGL.

4.9 While operating remotely controlled aerial toys as outlined in 4.8, any kind of filming or surveillance activities infringing the personal privacy shall be strictly prohibited.

Anybody violating the provisions made on this Directives shall be liable of punishment in accordance to the Section 25 (c) of Civil Aviation Authority of Nepal Act, 2053.

Download the Laws published by CAAN in PDF format.