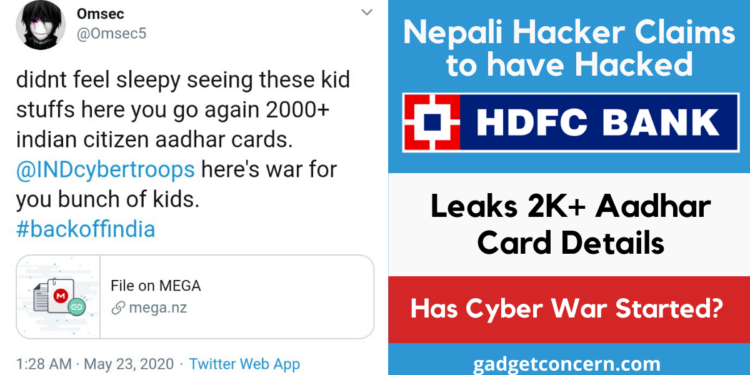 Today night, an anonymous hacker with username @Omsec5 on Twitter posted tweeted a tweet leaking a piece of data. He’s asked HDFC Bank and National Nodal Agency for Protection of Critical Information Infrastructure (NCIIPC India) to verify the piece of data. Later on he leaked Aadhar Card details of more than 2000 Indian Citizens.

In his first tweet, he has said that this is a demo, and more data is coming soon. He’s also called kids to Indian Cyber Troops, who hacked some Nepali websites yesterday and the day before.

His bio reads, “Just to make sure you Indians won’t put an eye on our land #SOLO.” Based on his tweet and bio, we can assume that he’s Nepalese.

Hackers of Nepal and India had agreed to stop targeting each other countries:

Satan had retweeted the tweet saying small mistakes can lead to serious trouble. He’d also said Indian Cyber Troops first to secure their sites than attack on others.

However, BRAHMA was not willing to stop the hacking. Read his reply when the third party (@Ekiddi3s, who acted to connect Satan and Indian Cyber Troops) said, “we and @INDcybertroops are cool now, and we were sorry for what did even @satan_cyber_god is in our part so stop.”

The cyberwar was expected to have ended. But, with new hacker appearing with HDFC Bank data, the situation has worsen. Now, Satan is also in favor of Brahma and Omsec.

How did this Nepal-India cyberwar start?

After the Government of Nepal released its new map including three new places; Kalapani, Lipulekh and Limpuyadhura, social media users started speaking against each other’s country. The main causative agents of creating such a situation were some Indian media. They were spreading hate against citizens of two nations. During that time, those Indian media were presenting false pieces of information of Nepal acting on China’s sayings. They also started saying Nepal doesn’t have the right to claim Kalapani, Lipulekh, and Limpiyadhura, claiming they were India’s land.

Furthermore, they commented bad lines on Manisha Koirala, actress as she had posted a tweet on Nepal’s favor. This developed hatred of Indian media on Nepalese people. As a result, hashtags like #wearewithmanishakoirala, #backoffindia, #backoffindianmedia, #LipulekhBelongsToNepal, etc. were trending on Twitter.

At the same time, Indian Cyber Troops, a hackers’ group in India, hacked a subdirectory of Botanical Research Centre, Banke’s website. On the same day, the National Library’s website was also found hacked.

On the very next day, Nepalese hackers Satan and BRAHMA hacked several Indian websites. Again, Indian Cyber Troops attacked Nepalese sites. This is how the Nepal-India cyberwar was started.

We believe, whether it is cyber war or millitary war, war never leads to progress. Both parties have to suffer in wars. The issues should be resolved peacefully. 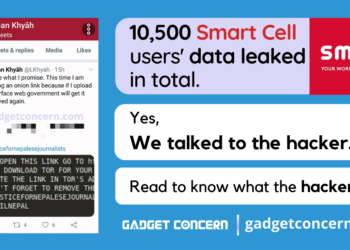