With this leak, he’s leaked total of 20,500 users’ data. However, Smart Cell hasn’t said anything regarding this and previous leaks. Neither the hacker confirms the data source.

Cyber Bureau has also not spoken on this case. The hacker has been unstoppable in leaking users’ data.

The hacker has been calling government responsible for these leaks. He’s asking government to provide justice to the government. He’s been mainly talking about Birgunj issue which took place about a week ago.

On his tweet, he said, “Some of you were messaging me about Indians defacing .gov.np websites. It’s our turn to respond them now.” 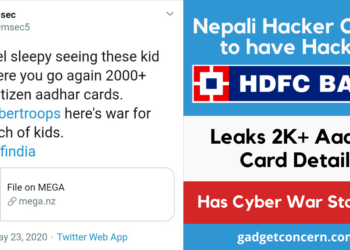